By Keith
Many Thanks to yoosklondonsummit user PatNInterrupt for highlighting the site Many Eyes for us. Many Eyes allows people to make visualisations of either text streams or data sets. Very useful for highlighting key information and also for comparing. Just for fun, I did a quick Wordle exercise with the Inaugural speeches of JFK, GWB Jnr and Obama, results below:

This is just a quick example of what can be done - the potential is there for much more interesting visualisations to be made and I'm looking forward to trying this out with a few Gordon Brown and David Cameron speeches.
Posted by The Yoosk Team at 12:03 No comments: 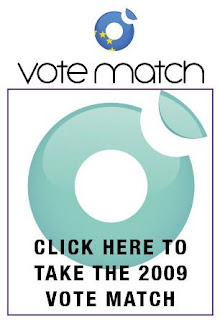 Yoosk recently attended the launch of Votematch, a site designed to match you with the political party which is most closely aligned with your views.

Its a bit like the facebook apps which ask you a few questions and then tell you which country/old lady name/sexual position you are (Yoosk is Switzerland, Ethel and missionary btw - but I'll leave you to guess where we came out on votematch.)

50,000 people used the site during the London Mayoral elections and they are aiming for 5,000,000 users during upcoming elections Europe-wide. Its a great site and is doing its bit to get people involved in politics and make politics a bit more fun - objectives we share at Yoosk.

Also at the launch were James Evans and William Carey from Hustings, Tony Parsons fom Votewise and Andy Bookless from NetworkMe and it was interesting to share some ideas with them - we are all climbing the same hill - and it would be good if we could help each other along a little.

Some final thoughts for Votematch - now that I know which party's ideology I most closely match, will you be developing a tool which makes sure that the candidates follow their own party manifesto's? And will you be sharing stats on user numbers and which parties they have been advised to vote for?
Posted by The Yoosk Team at 09:31 No comments: 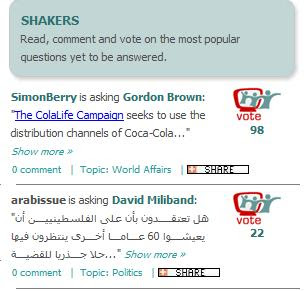 Recent visitors to yoosk may have been suprised to see a few questions appearing in Arabic script. These were part of a project we ran in conjunction with the British Embassy in Jordan.

Prior to a visit from David Miliband, the Embassy wanted to give the Jordanian public a chance to put questions to the Foreign Secretary and they chose Yoosk as the platform to enable them to do this.

In total, 43 questions were posted and David Miliband answered the top 5. You can see what he was asked, and his answers here. At a time when we clearly need to be opening up dialogue with the people of Middle Eastern countries, we are pleased that the FCO chose Yoosk as their partner.

We are also pleased with how smoothly the event went and for this we need to thank Rana Nejem at the Embassy in Amman who organised the Jordanian side of things and also Manal Nakli for giving up her holiday weekend to help with adding the Arabian subtitles on the video clips. Thanks All!!
Posted by The Yoosk Team at 08:00 No comments:

By Keith
What makes you happy? It is an interesting question and one which Matthew Taylor answered rather well here on Yoosk.

This paragraph from a Kezia Dugdale blog post was enough to make us at yoosk happy:

'The beauty of the tools of new media, whether it's twitter, youtube, facebook, yoosk, or blogs is the ability of people to organise, empower and affect change - or simply join a debate about the past, present and future of our country from the comfort of their armchair.'

Thanks Kezia, I hope the founders of twitter, facebook and youtube were similarly proud to be mentioned alongside us!! You can read the whole of Kezia's blog post on the role of blogging and the internet in politics here.
Posted by The Yoosk Team at 07:37 No comments:

Yoosk has come a long way since its first incarnation 2 years ago - we've added many new features and improved the original design - we recognise though that there is still much to be done to make Yoosk a truly user-friendly platform.

That is why we are particularly excited to have been chosen as one of the projects 4ip are investing in. Together with Screen West Midlands, 4ip have injected some development cash which is being used to give Yoosk a total makeover.

Made Media are the people we are working with on this and already we are in the process of outlining a new look and planning an easier user journey to asking a question. There's nothing better than having fresh pairs of eyes looking at what we're doing to get us focussed again on the direction we need to be heading.

We hope to get the changes rolling out soon, so, as they say, watch this space...
Posted by The Yoosk Team at 09:29 No comments:

On the success side, we managed to get answers from 10 of the 15 people we featured on the site, including 6 Ministers. We should also say a big 'Thank You' here to BSN who did an excellent job of filming all the interviews and at sometimes very short notice. Overall there were 491 questions posted on the site and 53 were answered - and this probably amounted to the widest ranging digital engagement exercise of its kind with the UK govt involved.

1. Gordon Brown declined to answer his questions.
2. We didn't get the level of traffic we would like to have seen.

Some criticisms from various people:

1. We did not provide a balanced cross section of opinion - there were no opposition MP's there.

Yes, this is true but the site was open to anybody to express their opinion and to challenge that of the Govt Ministers who we were questioning. We also had 4 non-govt people who did not represent govt thinking.

2. The Yoosk platform is not as user-friendly as it could be.

Yes, guilty - and this is something we are working on making better.

So, overall, it was an extremely busy time for us and a fantastic opportunity to give the yoosk platform its first real test - we've learnt some important lessons (number one being the value of video-answers) and are looking forward to our next opportunity to put what we've learnt into practice.

We had some intersting and insightful answers along the way and if you would like to see a cross section of some of them, take a look at the video below. If you were one of the online community who used/use yoosk, Thanks to you too, please keep coming back and also tell your friends about us.

If you have any feedback, feel free to add in the comments here or to contact us via the 'contact' form.

The Yoosk Team
Tim Hood and Keith Halstead are the founders of Yoosk, a public engagement service. We use this blog to tell you a bit more about who we are, what we are doing and why. A lot of the views and experiences are personal and each post carries the name of its author.

Yoosk has one purpose: to make open and constructive conversations with our leaders a part of everyday life.
Yoosk consists of a main platform where the public can ask questions of politicians and leaders, a series of dedicated channels where organisations can interact with targeted audiences, and a set of widgets which are used to gather questions from other websites.